By teaching theology, I feel I am educating my students in the most important subject, their eternal salvation. Students let you into their lives and that's an honour and privilege.

Father Patrick Fulton, CSB is grateful for the Basilians’ help throughout his life and through their generosity he gained a new perspective on religious life. His priestly ministry has focused on the high school apostolate, where he hopes to develop his students’ talents and gifts so God can use them in ways they never imagined.

“By teaching theology, I feel I am educating my students in the most important subject, their eternal salvation. Students let you into their lives and that’s an honour and privilege,” he said.

Patrick is the eldest of three children born to Robin and Mary Lou Fulton and was raised in Peachland, British Columbia. The family attended Mass at a small, rural parish that met in a converted garage each Sunday. The family’s involvement with the church was an integral part of his childhood.

The Fulton family first benefitted from the Basilians’ generosity when his mother approached Father Brian Sweeney, CSB, principal of Immaculata Catholic High School, a local diocesan Catholic school run by the Basilian Fathers. She wanted to send Patrick to the school, but the tuition of $100 month was unaffordable. His mother and Father Sweeney agreed that Patrick could attend on a pay what you can basis. “The Basilians were very generous to my family and I’m very grateful for this,” he said.

Father Fulton admits that he was not a stellar student in high school. He was easily distracted and not that interested in school, although he did enjoy challenging his religion teacher, Father Gordon Walker, CSB. However, he believes this makes him sympathetic to his students who struggle in the classroom today.

He graduated and despite his less–than-stellar grades, was accepted to the University of Saskatchewan. The campus was much larger than his rural high school, but he felt a sense of belonging when he was in the University’s Catholic college, St. Thomas More College, which was also staffed by the Basilians. This quickly became his home on campus and he was involved with student government and attended Mass. Through his involvement he met many Basilians over his four years at the College including Fathers Ian Boyd, CSB, Ron Griffin, CSB, Kevin Kirley, CSB, Joseph Penny, CSB, Oscar Reagan, CSB, Paul Rennick, CSB, Alan Smith, CSB, and Dan Zorzi, CSB.

In his third year, his housing situation fell through and he found himself temporarily living in his truck. Father Daniel Callam, CSB offered him a room in the Basilians’ house. “Once again the Basilians were generous in their response to need and took me in as one of their own,” he said.

Throughout his schooling, Patrick had put his teacher-priests on a pedestal, but when he was living with them he witnessed that they had good and bad days and enjoyed the camaraderie among them that was often expressed through teasing. “They were brilliant, but would ask and value my opinion. This was what I needed in my life at that point because I felt I could do what they do. I liked teaching and I admired who they were with one another,” he said.

The Basilians encouraged him to complete a fourth year for a double honours degree in philosophy and Far Eastern Religious studies. It was during this fourth year that the idea of joining the priesthood solidified itself. He researched and applied for the associate program and was sent to Andrean High School in Merrillville, Indiana. He found his first year of teaching difficult, but put off applying for the novitiate and instead asked for a second year of teaching. He loved the pace and that there was always something going on. The second year cemented his love for ministering in the high school apostolate. “Hanging around young people keeps me young because their lives are exciting and dramatic,” he said.

For someone who was hyperactive and accustomed to the busyness of the high school apostolate, it was difficult for him to slow down for his novitiate year at Saint Basil’s Novitiate in Sugar Land, Texas. His novice master was Father James Gaunt, CSB and assistant novice master was Carl Belisch, CSB. In the latter he found grandfather figure whose kind and gentle nature Father Fulton tries to channel when teaching.

As a scholastic, he earned his theology degree from the University of St. Michael’s College in Toronto, Ontario. Afterwards he was sent to Canadian Martyrs Parish in Calgary, Alberta where he was ordained by Bishop Paul O’Byrne, DD on September 20, 1997. He began his ordained ministry in a parish, which he found to be challenging and he missed the activity of working in a high school.

After a year and a half, he went to St. Joseph’s College at the University of Alberta to earn his education degree while living in the college’s residence. He would wake up early for his placement and when he returned home there would be so much happening in the residence. Even though he was operating on an average of four hours of sleep a night, he loved every minute of it and felt like he was back in the high school apostolate.

In 2000, he returned to the high school apostolate at St. Michael’s College School in Toronto, Ontario, where he spent the next 10 years teaching religion and was also a moderator for a student activity and swim coach. During this time he worked towards a degree in education administration.

He was appointed to St. Thomas High School in Houston, Texas in 2010 to serve as principal. He noticed a difference in how he related with the staff now that he was in an administrative role rather than teaching, but he also felt like he was making a difference in the life of the school. He remembers a mother who thanked him for taking a chance on her son and admitting him even though he wasn’t a strong student. The student benefited from the education he gained at St. Thomas and went on to graduate from university. He was able to implement programs and services that he saw were successful at St. Michael’s within St. Thomas, including the Learning Enrichment Centre, which provides support to students with varying individual needs and abilities.

In 2016, he returned to the classroom at Catholic Central High School in Detroit, Michigan. He loved being an administrator and believes it made him a better teacher. He strives to contribute to the collaborative culture among the staff because he knows from his administrative experience that it works well. In 2019, he was named principal of Catholic Central.

As a Basilian, he’s had many mentors and great experiences that have formed his teaching process and he continues the Basilian tradition of educating the whole person. By listening to his students’ questions and concerns he knows that they’re facing a world that does not value them and treats them as products. In his classroom the most important lesson is that each of his students are valued not for what they can produce, but because they’re loved by God. 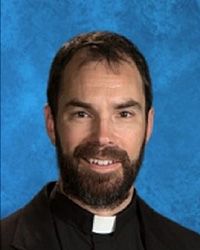