Basilian Network for Education and the New Evangelization 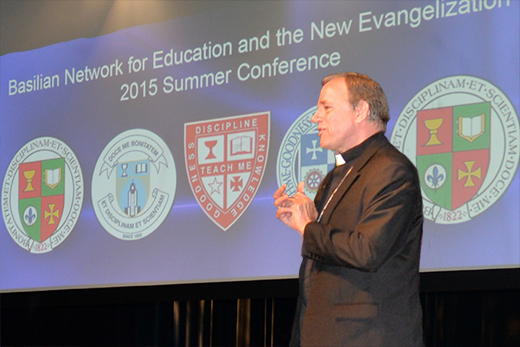 The Congregation of St. Basil established the Basilian Network for Education and the New Evangelization (BNENE) in 2015 with the intention of bringing together different communities of the schools under the responsibility of the Basilian Fathers in a common mission of engaging in ongoing formation on the Basilian approach to Catholic education and to promote a Basilian education within their schools.

The BNENE, an initiative of the superior general and General Council, seeks to contribute to the New Evangelization, and specifically to Catholic Education as one of its integral components. We strive to teach Goodness, Discipline, and Knowledge through three initiatives:

The ongoing formation of school leaders, teachers, support staff and communities in the apostolate of Catholic Education;

Teaching what the Church teaches on teaching with clarity and conviction (i.e., through thoughtful and prayerful reading of and reflection on key magisterial teachings on Catholic Education);

Through encouraging and promoting the educational ministry of our schools, and eventually of others, as a collaborative ministry that includes all those who serve them.

The BNENE committee, currently chaired by Father John Huber, CSB, continues to organize large and small gatherings that offer the faculty and staff of Basilian schools opportunities to come together in fraternity, educate themselves on what it means to be Catholic educators, and engage in dialogue with one another.

BNENE presentations encompass the Church’s teaching on Catholic education and how all within the school community are called to be a part of the distinct Catholic nature, and Basilian culture, of the school. These presentations focus on the official teachings of the Church Magisterium as espoused by the documents of the Sacred Congregation of Catholic Education over this past century, including, but not limited to, the document on lay Catholics in schools, issued by the Vatican in 1977. Also incorporated was the United States Conference of Catholic Bishops’ document, To Teach as Jesus Did, and from a more Basilian perspective, the article published in 1989 by Father Jack Gallagher, CSB when he was superior general on the Basilian charisms of education. (For a full list, see Resources for the Catholic Educator below)

It is the hope that the ongoing formation provided through BNENE will empower Catholic educators to make evangelization the primary mission in their classrooms and schools.

Watch: Archbishop Michael Miller, CSB on ‘The Vocation and Mission of the Catholic Educator’

Resources for the Catholic Educator