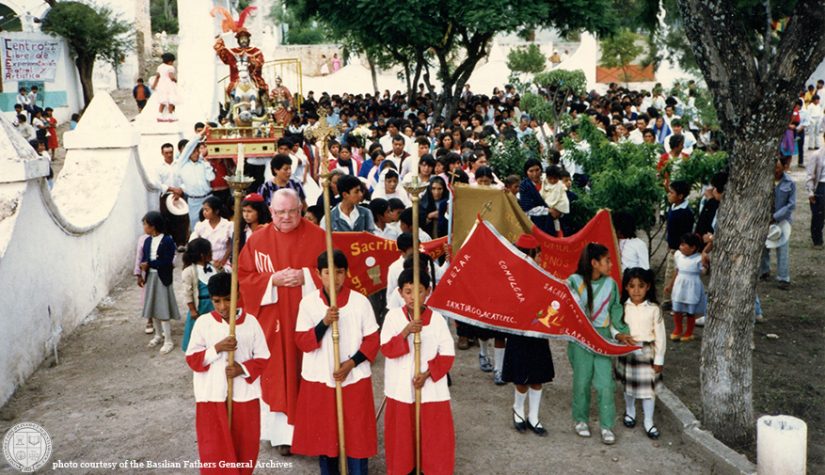 The Basilians were encouraged by Pope John XXIII’s call to religious communities to send its people to Latin America. We expanded upon our ministry of working with Mexican migrant workers in southern Texas by establishing an apostolate in Mexico. In 1961, Father Francis Launtrie, CSB and Father Max Murphy, CSB were the first Basilians sent to Mexico. They began by taking over the direction of San Juan Crisóstomo parish, in the barrio of San Juan de Aragón, in Mexico City. There they served the parish and its missions. Within the first ten months there were over 3000 first communions and 657 baptisms among 10,000 families. They continued their work in Mexico by taking over poorer parishes, building them up and giving them to the local diocese for continued ministry. In 1969, they expanded their ministry to the city of Tehuacán in the state of Puebla and now minister to a thriving parish community there.

One of the great achievements of the Basilians in Mexico was the introduction and the development of the ‘Catequesis Familiar’. It was developed with the Violeta Sisters and designed to introduce families to the basic teachings of the Catholic faith. The program has had great success in the areas where the Basilians worked and in many other parts of Mexico.

The Basilians were proud of the work being done in Mexico and the community welcomed the idea to establish another project in Latin America. They were intrigued by the possibility of a human development project in Colombia that combined evangelization, catechesis, education, and social and economic development. The Basilians were attracted to the possibilities of Cali, Valle, a city of some 3,000,000 people. They were offered the opportunity to take over a parish with a school attached. The founding group of Basilians arrived in Colombia in July 1987 and have expanded on their original foundation to Bogotá and Medellín. Since 1997, the Basilians have served parishioners of the Parroquia San Basilio located in the diocese of Medellín, Colombia through their priestly ministry and a number of social programs.

If you would like to support our mission work in Mexico and Colombia, please visit basilianfathersmissions.org