I made the decision that I would never say no to an appointment. I take it seriously that it is God’s will.

Even by Basilian standards, Father Maurice Restivo, CSB has held a variety of appointments across North and South America including teaching at Detroit Catholic Central High School, serving as the Assistant Academic Dean at the University of St. Thomas, and working as a pastor in Houston and Cali.

“I made the decision that I would never say no to an appointment. I take it seriously that it is God’s will,” he said.

His willingness to answer this call has taken him to some of the most dangerous places in the world, sometimes even challenging his faith in God.

A Houston, Texas, native, Maurice was born to Sam and Agnes Restivo. He and his two younger sisters, Kathy and Margaret, grew up in a loving Catholic family. When he was a child he remembers practicing for his first communion and the host made him gag. He didn’t go for months, and then only on Mother’s Day as a gift to his mother. He attended St. Thomas High School and enjoyed being taught by the Basilian priests and seminarians. He had considered the priesthood in the past, but by Grade 11 he had put this idea to the side.

After graduation, Maurice had attended the University of Dallas, but took time off because he didn’t feel focused. Instead he worked, while regularly attending Mass. It was at this time his parish priest approached him and asked if he could give his name to the Director of Vocations. Maurice initially said no, but the priest was not willing to let it go and said he would ask again in six months.

Shortly after that encounter, during a sleepless night Maurice decided he would give the priesthood a try. He entered the seminary for the Diocese of Galveston-Houston, and completed his undergraduate studies at the University of St. Thomas, where he reconnected with the Basilians and became good friends with Father Jack Hanna, CSB. The Congregation of St. Basil felt like the right place for him. “I liked that the Basilians were a brotherhood. Although these men were very different from each other, they were brothers, and they knew they were brothers,” he said.

After graduation he joined the Basilians as an associate and taught at Aquinas Institute in Rochester and after two years of teaching he decided to continue on as a novice in at the novitiate in Sugar Land, Texas. “It was a year of a lot of growth and dealt with issues in myself I never had dealt with before. There was a lot of personal growth.”

As a scholastic, he completed his Master of Divinity at the University of St. Michael’s College in Toronto, Ontario. By this point he had already done more travelling as a Basilian than in his entire life.

Newly ordained, he moved to Cali, Colombia, for three years to do pastoral work. There he was exposed to not only to blatant injustice between rich and poor, but a lot of violence. “It was very difficult to reconcile what I saw there with the loving God I grew up believing and the God I studied in seminary. It’s easy to believe in a loving God in first world, but it was very difficult to see his presence in Colombia.”

He took these insights with him to Pontifical Georgian University in Rome where he completed his graduate studies in Christology. Only here, while studying liberation theology, could he reconcile his faith with his experience in Colombia.

After graduation, Father Maurice felt a deep calling to live his faith. He answered this call by accompanying Father Bob Holmes, CSB on a peace and justice pilgrimage with Christian Peacemaker Teams to the Holy Land. He saw people who were on the ground and making a real difference in people’s lives.

As a reservist with Christian Peacemaker Teams, Father Maurice travelled to conflict zones in Hebron and Jerusalem in July 2012 and December 2013. There he monitored and made notes at military checkpoints to be turned over to the United Nations. During one visit his team spent its nights at a school in Hebron Hills, which was under threat of demolition. He also remembers watching from a rooftop the houses of families of suspected kidnappers get blown up.

“Seeing these things I feel helpless and can’t do anything. I know my presence gives some hope and help to those living through the mess because they know people outside know what’s happening and they care,” said Father.

Currently, Father Restivo answered the call to serve the Our Lady of Assumption Catholic Parish in Windsor, Ontario. The Parish had gone through a difficult time when the historic Assumption Church closed its doors in and there is no money to complete the extensive restoration required. The Parish now faces the uncertainty of whether its church will ever reopen. “There is a lot of healing that needs to happen,” said Father. 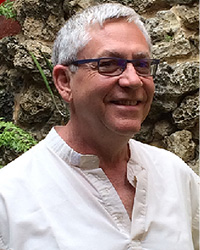