Basilian priests always made the Gospel accessible when I was a student and now we as a Congregation have to imagine how to best preach about Jesus in today’s world.

“Basilian priests always made the Gospel accessible for me as a student and now we as a Congregation have to imagine how to best preach about Jesus in today’s world.” said Father Storey.

In 2012, Father Kevin was appointed president of St. Thomas High School in Houston, Texas and held this appointment until he was elected superior general in July 2018. “I didn’t think I would like it, but I was constantly meeting people who loved the school and were planning for its future. I felt like I was working towards something bigger,” he said. During this time he secured funding to purchase an 11-acre property to expand the high school’s campus and make mission-critical improvements to ensure the school’s vibrant future.

Since becoming a Basilian, Father Storey has grown accustomed to moving. He worked as a missionary in Colombia from 2000-2004 before moving to Houston to teach at St. Thomas High School. “Moving is both a curse and a blessing,” he said. He falls in love with each place, making it hard to leave each time.

No matter where he lives, he always feels at home among his Basilian brothers. “To me, being a Basilian means a way to follow God and serve people in a brotherhood that allows me to be myself,” he said.

He now resides in Toronto, Ontario, where the Basilian Curial Office is located, and enjoys spending time with his family, all of whom still reside in Toronto. “As a Basilian, I never know where I may be sent,” he said.

Born in India, his family moved to Toronto when he was six. He grew up in a Catholic family, that dutifully attended mass each week. A young Kevin would sit in the pew in awe of the priests, who he saw as otherworldly, but ultimately could not relate and he did not feel compelled to join the priesthood.

In Grade 9, Kevin attended the Basilian-run Michael Power High School, where he developed his many talents, “I really came into my own during high school; I became more relaxed, athletic, smart and socially comfortable,” he said. Above all he had a desire to help people. At this time, it was his dream to become a millionaire, but not for the usual reasons of power and greed. Instead he wanted to use money to make the world a better place.

When he was in Grade 13, Father Frederick Arthur Black, CSB invited him to consider the priesthood. “I think they saw someone who was smart and idealistic.” Initially he said “no”, but a month later he attended a vocation retreat. “All of a sudden becoming a priest made all the sense in the world,” he said. He debated between becoming a priest and pursuing his passion for math while he completed his Bachelor of Science, majoring in Computer Science and Actuarial Science at the University of Toronto as an associate.

After graduation, he spent a year at St. Basil’s Novitiate in Sugar Land, Texas. He remembers this as the toughest but most important time of his life, as he was able to spend a year in prayer that was free from distractions.

Father Kevin continued on the path of priesthood as a scholastic and obtained his Master of Divinity from St. Michael’s University. Father Storey shares the Basilian Fathers’ value of education and has gone on to earn two more masters degrees including a Master in Pastoral Counselling from Assumption University in 1997 and a Master of Education, Administrative Leadership from the University of St. Thomas in 2011.

Father Storey was ordained on June 27, 1992 and one of his greatest personal achievements came a week later. While hearing confessions, he absolved a woman and knew from that moment on her life would be different. “Even if I do nothing else, I had helped this one woman have a better life,” he said.

“The Sacrament of Reconciliation is really important to me. There has never been a time that it hasn’t been really powerful,” he said.

Despite the demands that can be placed on a priest today, he still finds time to pursue his many other interests. As an athlete, he has completed triathlons and in 2009 he swam from Alcatraz to San Francisco. To satisfy his inner nerd, he relaxes by playing chess online; a single game can take him up to a year to complete, which is only natural when he thinks about each move for a week. 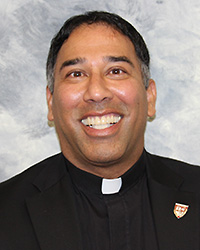