I'm able to keep in touch with graduates as they establish their families; its great to look back and see how happy and successful they are, and we Basilians have played a role in them becoming these people.

Basilians touch the lives of many within their classrooms, parishes, and community. Father John Huber, CSB, carries on the tradition of his Basilian education by laying the foundation for future educators in his roles as director of Catholic education at the University of St. Thomas in Houston, Texas and chair of the Basilian Network for Education and New Evangelization.

Despite his busy schedule, he enjoys keeping in touch with friends and former students online, “I’m able to keep in touch with graduates as they establish their families, it’s great to look back and see how happy and successful they are, and we Basilians had a role in them becoming these people,” he said.

The role of the Basilians in Father Huber’s life dates back to before he was born.

John was born in Rochester to John and Ann Huber into a typical Catholic family. As the third of six sons, it was a masculine household with plenty of teasing, wrestling, and competition. As a legacy family of Basilian-run Aquinas Institute, the Hubers had benefited from a Basilian education for generations. “Basilians had a reputation of being good educators, not just good teachers, but priests who cared about the whole student,” he said. There were even Basilian priests on both sides of his family tree.

During his sophomore year at Aquinas Institute, each student took a personality test to help determine a career path based on an individual’s strengths and weaknesses. Clergy member was at the top of the John’s list. “Not that I obeyed the results, but it helped me recognize where my strengths and desires were,” he said. “I had Basilian teachers in the classroom and I could see myself doing what they were doing,” he said.

After graduation, he explored joining the priesthood by attending both Basilian and diocesan vocation retreats. He admired the comradery amongst the Basilians and became a Basilian associate while studying French and Spanish at St. John Fisher College. During the summers he went on retreats to Strawberry Island and was able to form strong bonds with the other college aged associates from around Canada and the United States.

His first taste of living in community came after graduation. He was assigned to Annonay, the birthplace of the Basilian Fathers, to teach at the high school, St. Denis. It was his first time outside of Rochester and he was able to learn a lot about life as a Basilian

When he returned he was admitted into the noviciate in Sugar Land, Texas where he lived with five other novices. Here, his definition of brotherhood expanded. “It grew beyond just siblings, as there were older priests and his peers,” he said. “For me, there is a level of comfort in living in community and with the ministry, it’s not always easy, but I felt at home,” he said.

As a scholastic he studied theology for one year at the University of St. Thomas in Houston while working with the French speaking community in the city, where he prepared young francophones for first communion and confirmation. He finished his degree at the University of St. Michael’s College in Toronto, Ontario while living at the seminary. Having already had a taste of community life in France and Houston, he did not enjoy the hierarchical structure and rules of seminary life.

After completing his Master of Theology, he jumped at opportunity to compete a master’s degree at Middlebury College in Vermont, which included a year in Paris, in his opinion, the most beautiful city in the world. Again he made many good friends, both male and female, and continues to keep in touch, even officiating some of their weddings.

In May of 1992 he was ordained a deacon and then a priest in August. He spent time teaching and serving as campus minister at Aquinas Institute, before teaching at Bishop O’Dowd in Oakland, California. While living in California, he also completed his doctorate at the University of San Francisco.

He became the vice principal at Holy Redeemer in Detroit, Michigan and then taught at St. Thomas High School in Houston, Texas before serving as principal for four out of the five and half years he was there. In 2010, he was appointed principal of Detroit Catholic Central, and in 2014 he was appointed the school’s president. That same year he was also elected to the General Council.

In these roles he was shaping both the future of his students and the Congregation.

He carries on the traditions of Basilian education by recognizing the value in educating the whole person. “It’s a great Basilian trait: we care about everything the students do, that’s why it’s not unusual for us Basilians to attend sports games and other events, which the students appreciate and take notice of as well.”

He also served on the Board of Detroit Cristo Rey High School, a school sponsored by the Basilian Fathers for students who suffer the effects of poverty. He had been instrumental in facilitating connections between Catholic Central and Cristo Rey including tutoring and parent fundraisers. “These initiatives benefit both schools,” he said.

In 2018, he was elected to the General Council for a second term and concluded his ministry at Detroit Catholic Central High School.  He moved to Houston to minister part-time at the University of St. Thomas.  The General Council then asked him to increase his workload by working full-time as the Director of BNENE, the Basilian Network for Education and the New Evangelization.  This initiative offers professional development and faith formation to the faculties and staffs of our Basilian high schools to insure that the teachings of the Church concerning education, as well as the Basilian tradition of education continue despite the lower numbers of Basilians working in the schools.  He currently serves on five different school boards: the University of St. Thomas (Houston), the Aquinas Institute (Rochester), Incarnate Word Academy (Houston), Detroit Catholic Central High School, the Archdiocese of Galveston-Houston School Council, as well as the Inner City School Task Force (Houston). 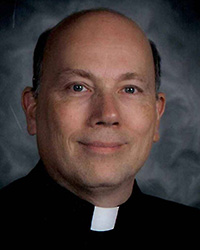 The diversity of work in evangelization and educat