There aren't enough of us [Basilians] to do all the work that God wants us to do.

Initially inspired by his Basilian high school teachers, Father Jefferson Thompson, CSB was determined to join the Congregation to educate the next generation in goodness, discipline, and knowledge. In pursuit of this goal, he continued to be inspired by his confrères and broadened his understanding of what it means to be Basilian.

In 2016 he celebrated his 25th anniversary of ordination, and was thankful to share the experience with three of his confrères, Father Mario D’Souza, CSB, Father Joseph Pilsner, CSB, and Father Joseph Roussel, CSB. They were all ordained during the summer of 1991 and have relied on each other for their friendship and camaraderie, and he draws on them for support in his education ministry.

In Grade 9 he walked the yellow brick halls of St. Michael’s College School in Toronto, Ontario for the first time as a student. The year before, when he was 13 years old, he immigrated to Canada from Jamshedpur, India with his parents, William and Patricia, and his sister, Paula.

In India, he had attended Loyola School, run by the Jesuits, up until Grade 7, and knew he wanted to be a teacher. But it was the unique experience of witnessing the passion of his Basilian teacher-priests in the classroom at St. Michael’s that inspired him to become a Basilian himself.

The Basilian presence in the school was easily felt as their numbers were stronger than now. Young Jeff’s first impression of them was “impressive, educated, well respected, and in charge.”

He was a good student, involved in tennis and debate and worked in the bookstore. He graduated in 1979 and continued his studies in English and French at the University of Toronto in the hopes of eventually becoming a teacher. After graduation, Jeff spent a year in Paris teaching English as a second language. When he returned, he was accepted into the Basilian associate program and furthered his education by taking philosophy in preparation for his Master of Divinity. As an associate he met more Basilians and spent time with them in their home. In addition to his initial admiration, he added “fun, chatty, and humourous” to his impression of them.

He continued in the formation process by teaching English and French at Aquinas Institute. “I was in my element and happy to know I was doing the right thing for me,” he said. This certainty encouraged him to enter the novitiate.

He spent his novice year in Sugar Land, Texas and took his first vows with five others. “It was a time to focus on ourselves and our spiritual growth. Active Basilian life does not leave lots of time for such introspection,” he said.

He pursued his Masters in English in Toronto, followed by a Master of Divinity at St. Basil’s College, Toronto School of Theology as a scholastic.

On August 3, 1991, Father Jefferson Thompson, CSB was ordained at St. Basil’s Church in Toronto. Family members from six countries were present for the occasion, along with his peers, who had supported each other throughout their formation. His Basilian teachers from high school and university concelebrated at his first Mass.

Following his ordination, he “cut his priestly teeth” in campus ministry, spending one year at Assumption University in Windsor, Ontario, the next seven at St. Joseph’s College in Edmonton, Alberta, and then three more at the University of St. Thomas in Houston, Texas.

In 2002, he once again walked the yellow brick halls of St. Michael’s College School, but this time as a teacher. “It was a dream come true. I was teaching the sons of those with whom I had graduated,” he said.

From 2005, he taught Theology and French at Catholic Central in Detroit, Michigan, and in 2012 he was named the school’s President. The year 2014 marked another homecoming as he returned to St. Michael’s, this time serving as its President until 2018.

Father Thompson has served the Congregation as its Vocation Director, and in this role he was all too familiar with one of the Congregation’s biggest challenges. “There aren’t enough of us to do all the work that God wants us to do,” he said.

He continues the Basilian tradition by channeling his passion for the subjects he’s teaching. One of his passions is evident as he takes every opportunity to speak French and attempts to master French cooking. He hopes his enthusiasm inspires his students, just as his many Basilian teachers and confrères inspired him along his journey. 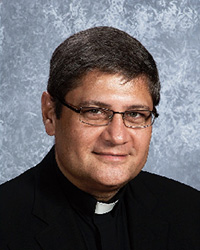