I'm a Basilian simply because the Holy Spirit drew me there.

Father Glenn McDonald, CSB reveals God’s plan for him through an unlikely combination of love and logic. As a student of science and follower of Jesus, he explains, “There is a pattern and logic to how Jesus works and once it is revealed, it can help you discern what God wants.”

His life is comprised of patterns: he repeatedly relies on his personal relationship with the Holy Spirit to confront challenges and achieve the big ideas God has in store for him. 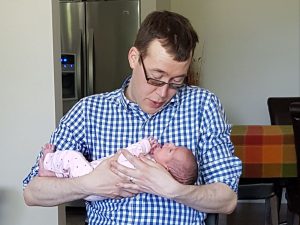 Father Glenn McDonald grew up in a small town north of Calgary, Alberta, with his parents Doug and Maureen McDonald and siblings, Alanna and Lois. Despite growing up in a strong Catholic family, he did not know much about priestly life until he attended St. Joseph College at the University of Alberta to study engineering. This was the first time he witnessed priests working outside of the parish: Basilians ran the student residence and taught in classrooms.

He was feeling the pressure of his studies in his third and most difficult year of university, when he had a profound moment: “It was a powerful experience that planted the idea that I should become a priest,” he said.

A few weeks later he was approached by, Father Jeff Thompson, CSB, who asked if Glenn had thought about becoming a priest. Joining the Basilians felt like the answer to his calling.

He attended a Basilian vocation retreat and at the age of 20, he was accepted into the Congregation as a Basilian associate.

After graduation, he completed his novice year in Mexico with four others. “I honestly didn’t think it would work out and I would go on with my life in engineering, but the initial incident was so powerful and it helped me to keep going. If it hadn’t been so distinct I probably would have dropped out,” he said. He continued in his formation by professing his first vows to the Congregation.

As a scholastic, he attended St. Michael’s College in Toronto, where his graduate studies proved to be even more difficult. “I didn’t understand what I was getting into, and I think if I had, I would have been overwhelmed,” he said. The expectations and level of writing required for the theology degree were very different from his engineering degree.

He described his scholastic master, Father Tom Rosica, CSB, as a bold person with big ideas, who was committed to giving the scholastics the full experience of universal church. Father Rosica accomplished this by sending the men in formation everywhere and introducing them to everyone; his penchant for big ideas has carried on into Father Glenn’s ministry.

Father McDonald was ordained to the priesthood at St. Basil’s Parish in Toronto on April 19, 2008. He spent his first years of priestly ministry at Christ the King Parish (now St. Kateri) in Rochester, New York. As a new priest in he was learning a lot, but it took a few years before things started to click.

His ministry changed drastically when he developed what he can only describe as a personal relationship with the Holy Spirit. “There was regular life and suddenly another spiritual life—more real than I am—was revealed to me,” he said. 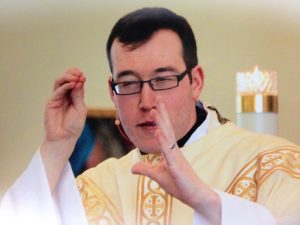 After two years in Rochester, he was appointed to St. Joseph’s College as the Director of Residence. He found the experience difficult. “It was challenging to be a priest because people expected me to compassionate, but I needed to be a hammer at times with 18-year-olds; finding that balance was difficult,” he said. Following a sabbatical, which was spent in Toronto, he returned to St. Joseph’s as Chaplain. “I didn’t go too willingly, but I discerned that was what the Holy Spirit wanted,” he said.

With this appointment God revealed some of his big ideas. Father McDonald organized and sent a large contingent from Edmonton to the World Meeting of Families in Philadelphia, Pennsylvania and that same day the College voted to sponsor Syrian refugees. “It wasn’t a coincidence: it was like the Holy Spirit said to me, you sent families to the world and I will send a family to you,” he said.

The College sponsored four Syrian refugee families. One of these families was featured in the national paper, the Globe & Mail. Suddenly, Father McDonald was being asked for interviews and appearing on TV. “It was surreal,” he said. The media attention was out of the ordinary for Father Glenn, who sums up his ministry as 95 per cent listening; listening to students, administration, and the Holy Spirit.

“There’s not much reason to be a priest if you’re doing it for worldly reasons. If you’re missing the personal relationship, you will be unhappy,” he said.

Father McDonald currently serves as pastor for the parishes of St. Alphonsus and St. Clare and is the district chaplain of Edmonton Catholic Schools. 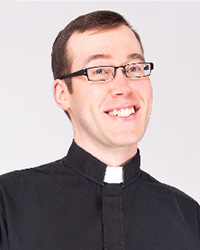