When you are ready for final vows and ordination you have already been living in community and under vows for years.

Father David Zapalac, CSB’s 27 years of priestly ministry have come full circle. In 2016, he returned to St. Anne’s parish, where he began his ministry in 1994 working with the 1200 Spanish speaking families as a part of the Hispanic ministry with Father Enrique Bravo, CSB.

Upon his return, he was delighted to witness how the Hispanic ministry has grown and become fully integrated into the greater church. Today, everyone in the office speaks Spanish; Masses in Spanish are held on Wednesday and twice on Sunday; and most importantly the Hispanic ministry has moved into the main building, whereas before it was in a separate building. “It felt segregated before and now it doesn’t feel that way, the parish has become more united,” he said.

St. Anne’s Church isn’t far from, although it is much larger than, his home parish, St. Basil’s Church, now known as Most Holy Trinity Catholic Church. This was where he first came to know the Basilians. It was the only Catholic Church in Angleton, Texas, a small farming community. He was raised as a “cradle” Catholic as the middle of three boys to his parents, Albert and Lillie.

The Zapalac family was one of the few Catholic families in the mostly Baptist area and Catholicism was a large part of his family’s identity. The family prayed the rosary together and the walls were adored with religious images. He attended the public high school, Angleton High School, and in his final year, his teachers encouraged him to pursue anything he wanted. Through prayer, he discerned he would like to join the priesthood as he wanted to help people to find the same peace that he found in his Church.

After graduation he attended the University of St. Thomas, which was also run the Basilians, and majored in philosophy and theology. While at university he became involved in campus ministry and helped out at masses and retreats. In his junior year, he joined the Basilians as an associate.

He decided on joining the Basilians because not only was it the only Congregation he knew, but he wanted to be like the priests who had inspired him throughout his life. As an associate he had the opportunity to see what he describes as “life behind the curtain”. He realized priests led normal lives outside of the classrooms and parishes.

Following graduation he was sent to Assumption High School in Windsor, Ontario, where he worked with campus ministry. He enjoyed speaking and listening to the students on their thoughts about different passages in the Bible. He remembers there was a comradery among students and their teachers that was unusual for a high school.

Wanting to ensure certainty in his decision in joining the Basilians, he spent another year teaching theology at Aquinas Institute in Rochester, New York. He found being in a classroom was very demanding and realized that while he was ready to move on in his formation, he would want to focus on parish life rather than teaching.

In 1988, he entered the novitiate in Sugar Land, Texas and had Father John Malo, CSB as his novice master. On apostolic days he worked with campus ministry at Richmond State School and worked with students who had intellectual disabilities. He enjoyed spending time reading stories, singing religious songs and sharing the Gospel and the students were eager to come to know God. These were very moving moments for David to witness.

As a scholastic he went to the seminary in Toronto, Ontario to study theology at the University of St. Michael’s College. He was in classes with Jesuits and students of St. Augustine’s. He lived in residence with other Basilians in formation and many non Basilians and a lot of friends with whom he enjoyed going to see movies and taking trips. Having been from a small town where everyone lived a similar lifestyle, for the first time he felt like he was exposed to different points of view and gained a broader and universal view of the Church.

He was ordained on June 26, 1993 in St. Basil’s Church in Angleton, Texas and it was there he would begin his priestly ministry. “I was administering to the people that I grew up with and there was an intimacy there,” he said. His years of formation prepared him for the priesthood. “I had been living under vows since the novitiate and living a communal life so it wasn’t a shock. When you are ready for final vows and ordination you have already been living it for years,” he said.

After five years at St. Anne’s parish, he was appointed parochial vicar at Holy Family Church a multicultural parish located in Missouri City, Texas. This appointment was followed by Sacred Heart in Manvel, Texas. The five-year appointment ended with the conclusion of the Basilian Fathers ministry in 2013 within the parish. “It was sad for everyone. The Basilians were very attached to the people, and the parishioners loved the Basilians,” he said.

From there he returned to his home parish of Holy Trinity Parish as its pastor. And in 2016 he once again oversaw the conclusion of the Basilian Fathers’ 72-year ministry within the parish. “Parishioners often said there was something special about the Basilians, perhaps we have a different approach to people,” he said. There was sadness for Father Zapalac as not only was it the end of the Basilian legacy, but this was his home parish family.

Now he is back at St. Anne Parish, but no matter where he is, he enjoys accompanying people at the important times of their lives and their willingness to allow him to become intimately involved with their faith especially at the important steps in their lives. Sometimes he feels at a loss, especially at funerals when he can’t take their pain away. “I try to bring hope in these situations and show them God’s plan,” he said.

Father Zapalac is known as the resident movie expert in his community house. No matter his struggles, he relies on his Basilian brothers. “Living with people who have gone through the same things you have means you always have someone to talk to. Sometimes we drive each other crazy, but we’re there for each other and praying for each other and that’s what really counts,” he said. 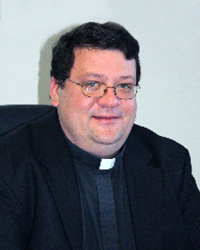