I’m part of a great history and I have the privilege of doing what I love and inspires me.

The pursuit of truth and the desire to serve by teaching brought Father Katulski to the Basilians, and now he serves the community for which he has so much respect. “I’m part of a great history and I have the privilege of doing what I love and inspires me,” he said.

David was born to Josephine and Alfred Katulski and raised with his older brother Robert in a predominantly Catholic neighbourhood in Detroit, Michigan. Faith played a central role in his early life. “I had a profound love for the Benediction of the Blessed Sacrament and I did 40 hours of prayer devotion every year. These were very important to me even at a young age,” he said.

Education was also important to his family and he followed in his older brother’s footsteps by attending the Basilian-run Detroit Catholic Central High School. Basilians had a reputation as excellent educators in the city of Detroit and it was worth taking the three buses to get to school each day.

There, he met Fathers Joe Barnes, CSB, Canning Harrison, CSB, and Bill Stoba, CSB. “Not only were they good teachers, but they interested in me as a person,” he said. He felt they saw someone who was seeking to serve God and his people in whatever way was best and encouraged David to keep searching.

In his junior year, his search led him to consider joining the Basilians. “I was intensely interested in human beings and I wanted to teach. I viewed joining the Basilians as a way to pursue both interests,” he said. He graduated in 1963 and entered the Basilian novitiate in Pontiac, Michigan. He went on to study language and literature at the University of St. Thomas in Houston, Texas. This was his first time leaving the state of Michigan. He missed his family, but he received words of support from them in the mail.

Privately, he found himself struggling with the idea of becoming a priest and in December 1967 he decided to leave the Basilians and finish his senior year as a lay person. He went on to do graduate studies in Michigan, when he was drafted to the U.S. Army and served in Vietnam for a year and a half.

After completing his tour, he pursued cooking at Le Cordon Bleu in London, England. He woke up one day and felt called to return to the Basilians. “A voice told me it was time to go back,” he said. He listened and got in touch with Father Thomas James Hanrahan, CSB, the Congregation’s superior general. A few months later he received a letter that he was accepted back into the Basilian community. In 1974, he began teaching English at Aquinas Institute in Rochester, New York where he enjoyed the dynamic between teachers and students.

He completed his Master of Divinity at St. Basil’s College and in 1978 he was ordained a deacon and appointed to campus ministry at the University of St. Thomas. “I was doing spiritual direction, which was different from my previous teaching appointment. It was a valuable experience that gave me the balance of serving as an educator and a priest,” he said.

On May 12, 1979, family and friends gathered at St. John Neumann Church in Canton, Michigan for his ordination and he preached his first Mass the next day on Mother’s Day. Following his ordination he was appointed to the Newman Centre at the University of Toronto and served there for nine years. There he found a community of students and non-students who were living in a post Vatican II Church and open to experimenting and the result was liturgies that were dynamic and creative. It was a time Father Katulski holds very dear to his heart as he found himself among a community that was seeking truth.

He was granted a sabbatical, which he spent in Ireland studying Celtic Spirituality, and when he returned he was appointed to the Basilian Institute of Spirituality in Toronto where he did retreat and parish mission work. In 1991, he was offered a teaching position at the University of Toronto’s Faculty of Education in Religious Education. He spent 12 years teaching graduate students who wanted to teach at Catholic schools or who were taking the course for spiritual development. “I loved it; there were great conversations and learning happening for both parties,” he said.

In 2010, he was elected vicar general of the congregation a position he held until 2022. “I was honoured to do it, but it was a tough position,” he said. The role involves providing special care for members who are having a difficult time. In addition to his role as vicar general, he offered sacramental ministry to the staff and students at St. Joseph’s College School in Toronto and is a Chaplain in the Knights of Malta. He also provides monthly retreats to the Daughters of St. Mary of Leuca in Markham, Ontario.

To take care of his spiritual needs, he takes the time to connect with family and friends, to meet with his spiritual director, and to spend time in prayer. 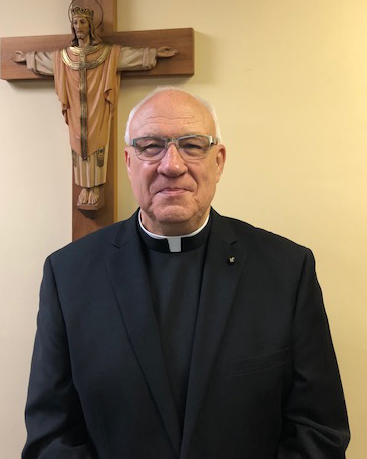