As a Basilian, there are many opportunities to pursue studies and work in a variety of roles within the parishes and schools and I am always a part of the community.

Father Andrew Leung, CSB has held a variety of appointments within parishes and schools including serving at St. Michael’s College School’s as director of spiritual life and science teacher, and most recently, its president. Each time he returns, he is warmly welcomed by the school’s teachers, students, and parents. No matter where life takes Father Leung, the Basilian sense of community follows.

“As a Basilian, there are many opportunities to pursue studies and work in a variety of roles within the parishes and schools and I am always a part of the community,” said Father.

Father Leung was born in Calgary to Gemma and Hok-Ling Leung. His family was heavily involved with the Chinese parish they attended. A young Andrew went through the sacraments and as a youth participated in the church as an organist and pianist, altar server, reader, and in the youth group. He attended former Basilian high school, St. Mary’s Senior High, but it wasn’t until he attended the University of Alberta in Edmonton that he first encountered the Basilians. He was heavily involved in student life at his residence, St. Joseph’s College, and he got to know the Basilians who lived there. At the end of his first year, he was approached by Father Jeff Thompson, CSB who asked if Andrew would be interested in joining the priesthood. He said he would consider it.

While in university, he spent his summers working on Strawberry Island, a Basilian summer retreat where he was introduced to more Basilians. He earned his Bachelor of Education in Physical Science and Biology and took a part-time teaching position at the Edmonton Catholic Public School Board.

In 2001, the Basilians invited him to teach at St. Michael’s College School, a prestigious all-boys school in Toronto. For Andrew, there were several differences of working in the single sex private school, including getting involved in the strong hockey culture present at St. Michael’s, but the most noticeable difference was the overwhelming sense of community among the teachers, students, and parents.

Following this, Father Leung decided he would pursue joining the priesthood. He completed his first year of theology before going to Vancouver to complete his novice year at the Basilian novitiate in Vancouver, British Columbia. Afterwards, he continued on as a scholastic and earned his Master of Divinity from the University of St. Michael’s College.

In 2012, he earned his Master of Education from the University of Toronto and in 2016 completed his principal qualification courses at the Ontario Institute for Studies in Education (OISE).

He was ordained at St. Basil’s Parish in Toronto in April 2008 and spent a year serving there as a young priest. As there was a need for Masses in Chinese, Father had the opportunity to go to Hong Kong to improve his language skills. Even in Hong Kong he still had ties to the Basilian community. He taught at Our Lady’s College, the high school his mother had attended, and the principal was the sister of Father Daniel Chui, CSB.

Back in Canada, he returned to St. Basil’s and was associate pastor from 2009-2013 and also as the coordinator of associates for the Basilian Fathers from 2011-2013. In this role he guided associates along the process through retreats and projects. He sympathized with the associates when they were discouraged and reflected on his own journey to joining the Basilians. “When a lot of my friends from university were getting married, I would wonder if this is right path. If God didn’t want me in this vocation I wouldn’t be happy,” he said.

In 2016 he was appointed pastor and rector of St. Alphonsus Parish and St. Clare Parish in Edmonton. The Archbishop of Edmonton later on appointed Fr. Leung in 2018 as the Archbishop’s Delegate for Catholic Education.

Father Leung is happiest when accompanying parishioners throughout their lives. “I am invited to witness very private moments: some of the most joyous and saddest times in people’s lives. It’s a very humbling experience,” he said.

He appreciates the opportunities for travel: he has visited Germany and Australia for World Youth Days and lived and worked all over Canada and the U.S.. He enjoys the variety in teaching at many different Catholic schools and seeing from the inside how each institution operates differently. “I’ve had the chance to experience a diverse range of cultures and it’s quite helpful to see people’s different perspectives and their sense of priorities,” he said.

No matter where he travels, he is always among family. He returned to St. Michael’s in 2013 and again in 2018 and each time lives with his Basilian brothers who also work at the high school. “Basilians are a family. Every family has unique characteristics and everyone is equal.” said Father Andrew. “There’s usually a good sense of humour and openness among the brothers.”

With each new role at St. Michael’s, he recognizes that the students see him in a new way. “Teenagers seek out knowledge in a more open way. They open themselves up for discovery and they want guidance, that’s an important trait that they have,” he said. 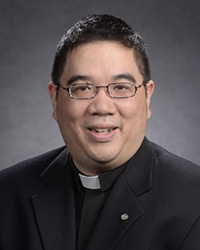