The ultimate goal of Catholic teaching is freedom: instilling internal and spiritual freedom in the student. Unless a teacher has this sense of freedom in their own life, they can’t communicate the value of this to their students.

The Basilian community was deeply saddened by the passing of Father D’Souza on Tuesday, September 26, 2017,  following a brief, but aggressive, battle with cancer.

Although Father Mario D’Souza, CSB had much to celebrate in 2016, including his 25th anniversary of ordination and the publication of his book, A Catholic Philosophy of Education: The Church and Two Philosophers, his greatest achievement remains finding stillness and solitude in his work.

He was initially attracted to the priestly way of life for the importance the vocation places stillness and solitude, but he has found that they do not come easily in active ministry.

Mario was born in Karachi, Pakistan to Ophelia and Archibald D’Souza and became an older brother to Melvyn. His childhood years straddled the period of the II Vatican Council and he grew up with an old-fashioned notion of Catholic culture. He attended a Catholic high school and college, followed by one year at the University of Karachi before moving to Dublin to study and to become a Jesuit.

As extremism began to take root in his hometown, he immigrated to Canada with his mother and brother. He continued to discern his vocation while working for the Bishop of Calgary as a lay person. He remained interested in joining a religious order and pursing teaching when his spiritual director advised that he should consider the Basilians, who were known for their contributions to Canadian Catholic education.

He joined the Basilians in 1984 and because he had already been through a Jesuit novitiate, he completed an individual novitiate program with Father Thomas Hanrahan, CSB at St. Thomas More College in Saskatoon, Saskatchewan.

As a scholastic he attended St. Basil’s College in Toronto, Ontario, where he enjoyed living in community with other scholastics. “It was a big group that continues to support each other over the years,” he said. He was ordained on August 16, 1991 at St. Pius X Church in Calgary.

In his initial years of priesthood he admits that he occupied himself with his profession and was kept busy with attending conferences and writing papers to achieve tenure. He accomplished a good deal, but admits that this sometimes came at the expense of the stillness and solitude that is vital to his priestly ministry. Over the years he has learned to deliberately set time aside for this. He admired Father Ken Decker, CSB who served as superior general of the Congregation from 2002-2010, as his leadership and life were marked by stillness and solitude. While serving on the General Council from 2002-2006, Father D’Souza witnessed how he would decrease activities to increase the presence of the Lord in his life.

Father D’Souza enjoys a life of teaching and scholarship and finds a great deal of stillness in his research and writing, and also through his prayer life and aesthetic pursuits like reading poetry, fiction and spiritual readings and listening to classical music. “I’m not sure I practice stillness and solitude as generously as I should, but I am aware of it and attempt it,” he said.

The challenge of seeking calmness is intensified by the declining number of priests. “Our lives are very demanding and we can end up being called on seven days a week. One can fall into the trap of priestly activism.” he said.

He feels priest educators need to focus their attention to promote the Catholic mission. This means in addition to teaching there is a need to assist in teacher formation. To further this, he served as the executive director of the Basilian Network for Education and the New Evangelization (BNENE). This new initiative aims to form Catholic educators and administrators and to enable them to understand a Catholic approach to education. BNENE achieves this through seminars and workshops held at the Basilian high schools.

“The ultimate goal of Catholic teaching is freedom: instilling internal and spiritual freedom in the student. Unless a teacher has this sense of freedom in their own life, they can’t communicate the value of this to their students,” he said. 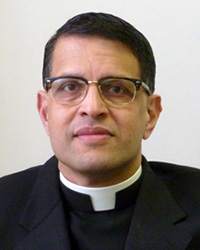