God led me on a path to serve through the ministry I am able to do with the Basilians. I am grateful for the opportunities and the brotherhood I have found with others sharing my sometimes lonely journey.

Father José Del Toro, CSB has explored many activities and identities in an attempt to fit in, before realizing that Congregation of St. Basil was the best direction. “God gave me a place where I belong after feeling like I was on the outside for so long. I truly feel like I belong with the Basilian Fathers,” he said.

José grew up in Mercedes, Texas in a two bedroom house, where the living room also served as his bedroom. He was raised in a Catholic family by his parents, José Felix and Mary Ann. His four older sisters were a bit older and his parents were often busy working, while his mother was also earning her bachelor and masters degrees in education. This left José without many people to interact with, making for a sometimes lonely childhood. By the time he was in high school he had joined many activities in an attempt to fit it, but felt he never really did.

He graduated from high school and then entered college, where he tried everything from pre-pharmacy to theatre. These fields served him later when he decided on a career in education. “When I figured out what to do with my life, my role model was my mother who had earned degrees in education and early childhood education,” he said.

After he graduated, he worked in Houston, Texas as a bilingual elementary teacher and at the same time was getting back into the habit of going to church. In his search for a parish, he settled on St. Anne’s. “I felt a sublime happiness at the Masses in Spanish and even though I didn’t know anyone and sometimes the priest might have been a little hard to understand, just being with the people brought me such happiness,” he said.

One week, he attended Mass at a different parish and the priest was speaking on the topic of vocations to the priesthood. José described this experience as, “the finger of God pushing things in the right direction.” From there he asked for contact information for the vocation director, whom he was able to meet later that week. After a few meetings he figured this was something that was worth investigating in his life and he called his mother to tell her about it. Initially she wanted to know if he was sure of his decision and later told him she dreamt that he wasn’t looking at the right community.

This prompted José to search the Internet for religious orders and education and he quickly learned about the Basilians. He was put in touch with Father Kevin Storey, CSB, vocations director at the time, and José was surprised to find out that the parish where he had the sublime feelings of happiness was also a Basilian parish.

To discern his calling further he was invited to visit the priests’ residence at the University of St. Thomas. The man who answered the door, Father Edward “Ted” Baenziger, CSB, would become his spiritual director. José continued to come to the house for prayer and as he became more comfortable, he got to know the community better by joining the priests for meals. By the summer he had entered into the associate program and was living in community while teaching elementary school.

At this time there weren’t enough people for a novitiate program, so he was to spend a year at Bishop O’Dowd High School in Oakland, California. José had a hard time accepting this appointment because it was his belief that he was called to the priesthood to minister to people who had a similar backgrounds and experiences to him. He didn’t think he would be fulfilled working at a mainly middle class high school in California, so he prayed asking God to open the eyes of those making the decision.

Instead, it was his eyes that were opened. One day while working in garden when he was overcome by a spiritual experience and was given the message that regardless of the assignment, the Basilians were where he was supposed to be. Therefore, Oakland was where he was supposed to go. He told Father Baenziger about it who laughed and said that very day was the eve of Pentecost when the Apostles were given their mission.

José spent the year in Oakland teaching biology and Spanish and once again dealt with his feelings of being an outsider by becoming involved with the Hispanic speaking club and joining the local orchid community. Afterwards he decided to move forward in his formation.

In January 2002, he entered the novitiate with three other men in Tehuacán, Mexico. It was at this time he learned that his father who had lived with recurring cancer for years had been told he was out of treatment options. José was given permission to go home for a week to be with him. When he returned, he kept in touch with his father through weekly phone calls. “It was a tearful situation, but I was grateful to know that my father wanted me to continue on this path,” he said.

As a scholastic, he attended the University of St. Michael’s College. He supplemented his theology courses by volunteering at a men’s drop-in shelter and helping at a nearby, mainly Hispanic, parish. Through these activities he realized he was creating his own community. “Community goes beyond communal brothers and you don’t need to have something in common get along,” he said.

He took his final vows and was ready for his deaconate year. When he was asked where he wanted to go, he chose Detroit, Michigan. He had heard a bit about Detroit from his novice master, Father Tom Sepulveda, CSB, who was serving as pastor at St. Anne’s Parish in Detroit and thought he would enjoy working in a diverse community. The parish work kept him busy; at his first baptism, he baptised 27 babies.

He was ordained by Bishop Ricardo Ramírez, CSB at St. Anne’s Parish in Houston, Texas on April 4, 2008 and his family traveled from South Texas to take part in the celebration. His mother gave him his father’s watch as a reminder of his spiritual presence.

Following his ordination he went back to Detroit and was excited by a new project the Basilians were sponsoring, Detroit Cristo Rey High School. He was hoping to be a part of this new school that provides a high-quality college preparatory education to students from economically disadvantaged families. He met with the principal, Susan Rowe, who informed him that they needed a religion teacher and Father José jumped at the opportunity.

“This was God’s plan. I didn’t know what doors would open when I committed to the Congregation, but this project was like him handing me a little gem for going where he was calling me and encouraging me to keep me going,” he said.

His ministry in education has kept him going. He enjoys challenging his students to think and loves seeing their eyes light up when things start to make sense to them. In his role, he’s able to share his experiences and let his students know that they are not alone. Additionally, Father José has continued his own studies, completing a master’s degree in education and is due to finish his doctorate in the summer of 2021.

As a Basilian, Father Del Toro has built up a strong community of confrères and friends. Whenever he travels he always stays with family and friends, whether it’s in Texas, California, Ontario, or Ecuador where he has gone for mission trips. “I’ve been blessed to make friends wherever I go,” he said. 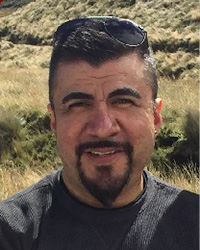