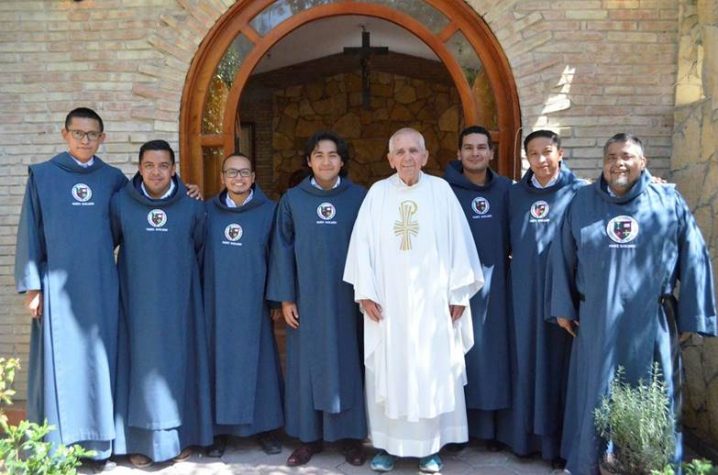 The Basilian novitiate in Tehuacán, Mexico opened its doors to the current novice class on July 16, 2020. They will spend one year and a day, as prescribed by canon law, away from friends, family, work, and most things familiar to everyday life so that they may build a strong foundation of prayer and spirituality for the rest of their life as a Basilian.
Father Beto Rojas, CSB, director of novices in Mexico, shares this update of the activities in the novitiate:

The Basilian novitiate community in Tehuacán has now spent two months together. It is a large and diverse community; the six novices live with myself; Father Jess Owens, CSB, assistant director of novices; Father Juan Carlos, CSB, vicar of the parish of San Lorenzo; and Father René Espejel, CSB, vicar of the parish of San José Obrero. We celebrate Mass every Wednesday, share breakfast, and reflect on Sunday’s readings with the priests of the parish: Father Alex Estrada, CSB and Father Daniel Porter, CSB. We celebrate the Eucharist in the parish on Wednesdays and Sundays and in the novitiate on the other days with all of the priests taking turns presiding.

We started the novitiate year with a one-week silent retreat in the Trappist monastery of Jacona, Michoacán. Then we took a two-day sightseeing tour through several places on our way to Tehuacán. These activities helped us recognize some fundamental goals of the year: allowing God to enter our lives in silence and prayer; learning to know ourselves better; and working with the Spirit to build community.

External workshops and courses were postponed when one of the novices contracted COVID-19 and needed to quarantine. During this time, the novices followed their daily routines of prayers, house cleaning and maintenance work, exercise, music, and singing. Every other week we spend a couple of hours unloading and distributing food in the parish and we all have an afternoon off on Sundays. On September 15, we celebrated Independence Day with the eight Basilian scholastics who came from Tlalpan, Mexico with Father Alberto Juárez, CSB and Father Pablo Walsh, CSB. Father Walsh, superior of Mexico, shared with the novices “Historia de la Vida Religiosa” during a week of conferences and discussions.