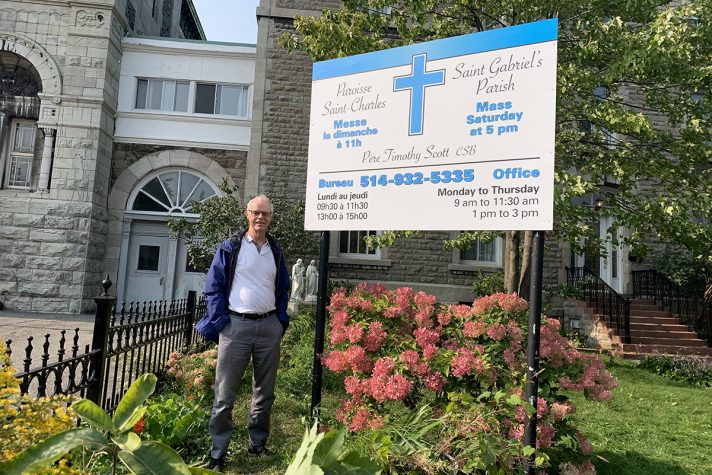 On September 1, Father Timothy Scott, CSB officially assumed responsibility as pastor of the English-language St. Gabriel’s Catholic Church and of the French-language Église St-Charles. Serving as pastor of more than one community comes with its challenges, but this appointment has the added layer of being conducted in two languages.

“I had an upcoming funeral that I thought would be in French, but when I checked I realized it was for a member of the English community. When the parishes are sharing the same space and there is one secretary, I need to check in which language the service is to be held. It keeps me on my toes,” he said.

The two parishes stand side-by-side in Montreal, Quebec and prior to Father Scott’s appointment, neither had a permanent pastor. Auxiliary Bishop Alain Faubert approached him about serving as pastor of both communities, and with the consent of the General Council, he was appointed with a four-year mandate.

In September, parishioners of St. Gabriel’s were notified that their church would need to close due to structural issues with renovations to be undertaken in the spring. In the meantime, both parishes are celebrating Mass at St-Charles. “The English-speaking St. Gabriel’s community is a guest of St-Charles in this arrangement,” said Father Scott. St. Gabriel celebrates Mass at 5 p.m. on Saturday in English and St-Charles celebrates in French at 11 a.m. on Sunday. This allows for enough time in between to sanitize the pews due to the pandemic.

When stepping into this role, one of the first things to do was to combine the food banks into a single service for people in the neighbourhood. “Both communities have had a long history of service to the poor,” he said. The combined food bank serves 200 families and plans are being made to distribute Christmas coupons to be exchanged for food hampers for about 400 families in the community. Pointe St-Charles is a working-class district of Montreal with a significant immigrant population, so the needs are very great.