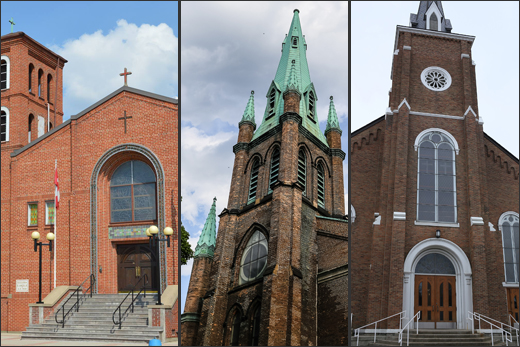 Father Maurice Restivo, CSB will serve as pastor of the newly formed Windsor Heritage Catholic Family of Parishes; this restructuring brings together some of the most historically significant parishes in the Diocese of London. The parishes of Assumption, St. Alphonsus, and St. Angela Merici and communities of St. Daniel Comboni African Catholic Community and St. Benedict Tridentine Catholic Community will each keep their own identity while the pastoral team will be shared among communities.

The Diocese of London adopted the family of parishes model in 2017 to address the reality of fewer available priests. It was announced in December 2019 that this parish family would be activated in 2020 and Father Maurice Restivo, CSB would serve as its pastor. Father Christian Amogu and Father Steven Huber, CSB will serve as the family of parishes’ associate pastors and Father Huber will continue as chaplain of campus ministry at Assumption University. The name Windsor Heritage Catholic Family of Parishes was chosen to celebrate the distinct identities of the parishes in the newly formed family: Assumption is the oldest parish west of Montreal in Canada; St. Alphonsus is the oldest parish in Windsor proper; Father Restivo’s fluency in Italian will help him when celebrating Mass at St. Angela Merici, which serves Windsor’s Italian community; St. Daniel Comboni African Catholic Community serves Windsor’s African community; and St. Benedict Tridentine Catholic Community celebrates the heritage of Latin Mass.

A transition team is tasked with addressing the issues that arise to ensure a smooth transition in advance activation date that is now set for September 1, after being pushed back due to Covid-19. The transition team’s goal is to be of service to God’s people while recognizing the limitations that come with fewer clergy members. “A successful transition relies on real involvement from the laity,” said Father Restivo. There has been ongoing religious formation for the pastoral team, parish staff, and pastoral councils.