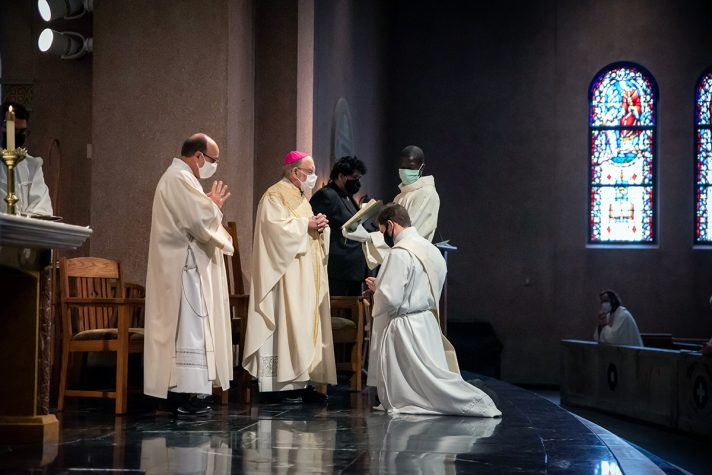 On May 23, 2020, the Congregation of St. Basil, also known as the Basilian Fathers, celebrated the ordination of Father Eduardo Rivera, CSB. Bishop George Sheltz, Auxiliary Bishop of the Archdiocese of Galveston-Houston, presided at the Mass of Ordination, held at St. Anne Church in Houston, Texas at 10 a.m. CST.

“Each ordination is a cause for our community to come together in celebration and even though we can’t be together physically due to restrictions surrounding COVID-19, we are nonetheless overjoyed to support Eduardo as he embarks on his priestly ministry,” said Very Reverend Kevin Storey, CSB, Superior General of the Congregation.

As a newly ordained priest, Rivera will serve in campus ministry at St. John Fisher College in Rochester, New York.

“Students have a lot going on when they’re in college; they’re making new friends and managing their coursework while trying to figure out their next step. It wasn’t so long ago that I was at that transition point in my life and trying to discern what God was calling me to do. I will be able to relate my experience to what they’re going through,” said Rivera.

Rivera’s own formation journey began when Father Michael Buentello, CSB offered him a job in campus ministry during his freshmen year at the University of St. Thomas. While he was organizing retreats and Bible studies, he found himself discerning his own vocation.

In the spring semester, he attended a retreat on discerning a vocation to religious life, initially to support a friend, and subsequently joined the Basilian Associate program. He enjoyed getting to know the Basilians on a deeper level by joining them for meals, learning about their charism of education, and by his senior year he was living with the Basilians.

He graduated from the University of St. Thomas with a Bachelor of Arts in Theology and Philosophy and entered the year-long novitiate program. Afterwards, he took temporary vows of poverty, chastity, and obedience.

As a scholastic, he completed a pastoral internship as coordinator of spiritual life at St. Michael’s College School in Toronto, Ontario and earned his Master of Divinity degree from St. Mary’s Seminary in Houston.

Rivera professed his final vows to the Congregation on May 17, 2019 in the Chapel of St. Basil at the University of St. Thomas and was ordained to the diaconate at the Co-Cathedral of the Sacred Heart in Houston, Texas on May 18, 2019.

As a deacon, Eduardo ministered at St. Anne parish in Houston. Where he journeyed with parishioners at different points in their lives having presided at weddings and graveside services, as well as sharing in the sacramental life, and working with the RCIA program.

“There have been high and low points throughout my formation, but I had a sense that I was where I should be and that God was calling me to the priesthood. Whenever I had a rough day I could return to the Basilian community where communal prayer and social interactions within the home would pick me back up. I know I always have the support of the community,” said Rivera.

Founded in France in 1822, The Congregation of St. Basil, also known as the Basilian Fathers, is a vibrant community of priests, students for the priesthood, and lay associates who profess simple vows. Basilians serve God through their apostolic work in education and evangelization throughout France, Canada, United States, Mexico, and Colombia.

The Basilian scholastics in Tlalpan, Mexico City shared in the Day of Dead celebrations by honouring past Basilian confrères. The Day of the Dead is celebrated in Mexico as an […]