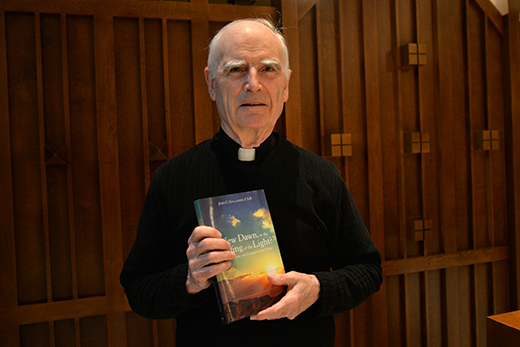 Father John Gallagher, CSB examines the influence of culture on evangelization in his newest book, A New Dawn, or the Fading of the Light? Culture and Evangelization Today. In the book, he draws on his experience teaching moral theology at the University of St. Michael’s in Toronto, Ontario; St. Joseph’s College in Edmonton, Alberta; and the University of St. Thomas in Houston, Texas. He also served as superior general of the Congregation of St. Basil from 1989-1993.

He talks about the inspiration for the book in the following interview:

Q. Why did you write this book?

A. The notion of culture and religion is very important. Following the Synod of Bishops on Evangelization in 1972, Pope Paul VI published On Evangelization that stated we need to create a Christian culture and that stirred a certain amount of interest on the topic, but since then there has been a disappointing amount on how to go about this.

Too often when this question comes up among current authors they think how to adapt religion to culture, but that’s not what Pope Paul VI had in mind. He talked about creating a Christian culture and that is much more creative than just adopting things. He thinks there has to be interaction between culture and the Word of God so we can create a new mentality and way of life. This is neglected in current literature and I wanted to get something off my chest on the topic.

Q. How did you make the connection between culture and evangelization?

A. I’m a moral theologian so I started from the point of view on why people reject traditional ethics and what are the social reasons for doing so. That’s how I first became conscious of how culture and the Word of God interact, especially what elements in culture can deafen us to the Word of God.

Q. How did you go about writing the book?

A. I wrote mostly about thoughts I had picked up over the years 30 years of teaching moral theology. I would begin my classes by asking my students, what are the forces that are formed in their minds so that they wouldn’t agree with tradition? I filled in the blanks on what I didn’t know by searching for anyone who had written about culture and evangelization and there weren’t very many.

I came across the work of Christopher Dawson, an English Catholic historian, and Jaques Ellul, a French philosopher, whose research offered clues on how to Christianise culture.

Q. Who was this book written for?

A. The book would be of value to bishops, priests, and educators and I wrote it with the hope that they could use it to lead parents, who are the main educators of their children, through the main ideas laid out in the book.

Q. What does the title mean?

A. I leave the title as an open question, there are a lot of signs that the light is fading in the West as Christianity is not doing well. I tried to lay out in the book that if we want to move forward, here’s what we’re going to have to do.

The book was published in 2019 and is available at www.jgallaghercsb.com.