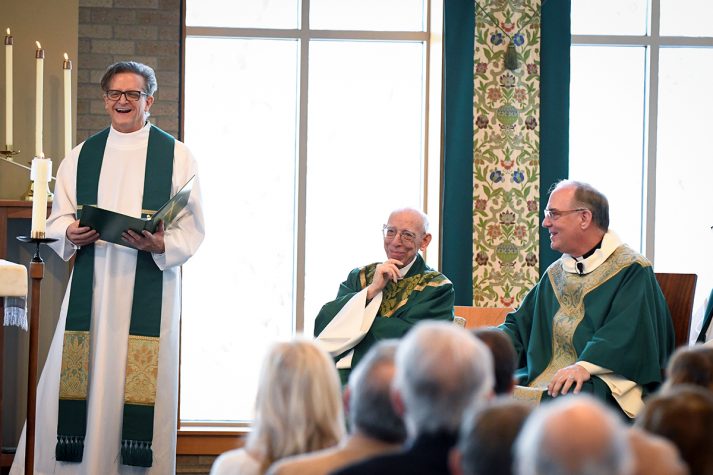 There was standing room only in the Hermance Family Chapel of St. Basil the Great for the Mass of Thanksgiving to celebrate Father Trovato’s birthday on Sunday, February 23. Father Paul English, CSB presided and concelebrants were Father Dugan, Father Al Cylwick, CSB, Father Kevin Mannara, CSB, Father Morgan Rice, CSB, Father Norman Tanck, CSB, and Father Trovato. Father Tanck preached and in his homily, he noted that many Basilians who studied and worked at SJFC could trace the heritage of their faith back to Father Trovato including himself, Father English, Father Murphy and many others. Parishioners of Christ the King Parish, now St. Kateri Tekakwitha Parish, and members of the Fisher family were also blessed to have Father Trovato minister within their communities.

The evening before, SJFC president, Dr. Gerald Rooney and his wife, Susan, hosted a dinner honouring Father Trovato and Father Dugan at the SJFC President’s House. In attendance were Basilians who were in town for the celebrations along with Bishop Emeritus Matthew Clark, Sister Mary Ann Binsack, RSM, and Father Trovato’s niece with her husband.

Father Dugan, who also celebrates his 60th anniversary of ordination this year, spent 50 years in parish ministry in Mexico, where he ministered to the sick and delivered a successful program, ‘Catequesis Familiar’ to introduce families to the basic teachings of the Catholic faith. He retired in 2015 and currently resides in Rochester.