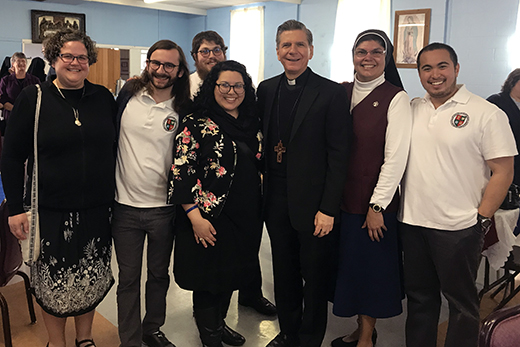 The Basilian novitiate in Houston, Texas welcomed four novices in August 2019. They will spend one year and a day, as prescribed by canon law, away from friends, family, work, and most things familiar to everyday life so that they may build a strong foundation of prayer and spirituality for the rest of their life as a Basilian.

Another month has come and gone at the novitiate in Houston, Texas. This month, the novices had the opportunity to meditate on the call to care for the home God has given us, our planet Earth, under the direction of Sister Linda Gibler, OP as part of a series of inter-community novitiate gatherings. Throughout their novitiate year, Basilian novices have met with other men and women religious in formation in the state of Texas. Residents of the Basilian novitiate travel to San Antonio, Texas for gatherings organized by Sister Helen Marie Miksch, CDP, director of formation for the Sisters of Divine Providence. They feature excellent presentations by religious to assist novices and people in early formation in their understanding of the call, and are often on timely topics. The gatherings include time for prayer together and social time in the evenings to give the men and women in formation a chance to interact with their peers and relax in a welcoming atmosphere. Formators also have the opportunity to meet, discuss plans, exchange ideas, and raise issues and questions. These gatherings have been a highlight throughout the novitiate year.

This month’s gathering was held during the weekend of the Feast of the Presentation and the local archdiocese celebrated religious life on February 2 with a bilingual Mass celebrated by Archbishop Gustavo Siller at Christ the King parish in San Antonio. The Mass was attended by religious from around the archdiocese including the visiting Basilian novices and other participants of the inter-community novitiate gatherings.

The novices joined the Basilian Fathers and Basilian Lay Associates in Houston in celebrating the Feast of St. Basil on January 2 at St. Anne Parish. The community welcomed three new Lay Associates who committed themselves to the Congregation. The Mass was followed by the annual St. Basil Day dinner.

Also this month, the novices read and discussed G.K. Chesterton’s book about St. Thomas Aquinas, The Dumb Ox. They also spent a quiet “desert day” in prayer and meditation at the Lake Houston Wilderness Park, a beautiful natural area with trails and lakes. The novices accompanied Father Mitch Dowalgo, CSB to attend Sunday Eucharist at the Motherhouse of the Incarnate Word Sisters.

The novices continue to grow in their knowledge of the Congregation, the Lord, and themselves as they journey toward requesting first vows as Basilians. Your prayers are most appreciated.