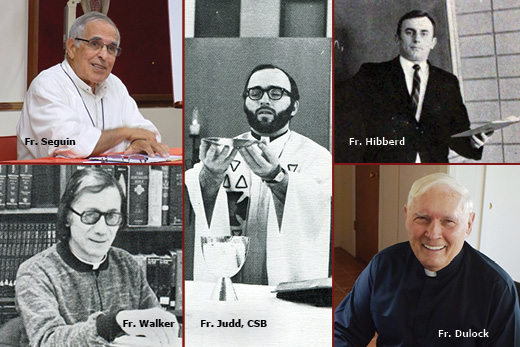 Father Neil Hibberd, CSB was ordained a priest in the Cathedral of the Sacred Heart in Rochester, New York on December 13, 1969. He began his ministry teaching with appointments at St. Michael’s College School in Toronto, Ontario and St. Charles College in Sudbury, Ontario. He also spent a number of years in Windsor, Ontario where he was engaged in the family counselling ministry and assisted clergy of local parishes.

Father Judd dedicated his priestly ministry to social justice. He was a member of the Detroit Peace Community, a mostly Christian group promoting peace and resisting warmaking and violence and Groundwork for a Just World, a Catholic Michigan-based peace and justice organization. He also served on the General Council as Vicar General from 2002-2010.

The Basilian community is deeply saddened by the passing of Father Judd who died on December 13, 2019, his 50th anniversary of Ordination.

Father Seguin has been in Colombia since 1987 when the Basilian Fathers established their missions to Colombia. There, he helped to establish a school, Instituto de Nuestra Señora de la Asunción, in Cali, Colombia; he has also served at the Basilian house of formation in Bogotá, Colombia and at Parroquia San Basilio in Medellín, Colombia. Currently he serves as the director of scholastics in Medellín.

On December 20, 1969, Father Vincent Dulock, CSB was ordained to the priesthood in St. Anne’s Church in Houston, Texas by Bishop John Morkovsky. His priestly ministry has been varied, having taught in universities and high schools and served as a pastor for 27 years in the Archdiocese of Galveston-Houston. Currently he serves as the director of St. Joseph Mission Center, where he raises money for the Basilian missions in Mexico and Colombia.

Congratulations to each of these Basilians on achieving this inspiring milestone.