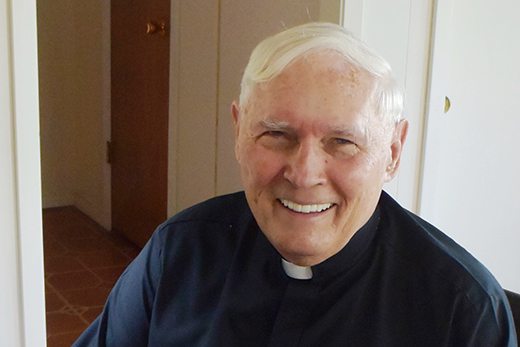 On November 30, Father Vincent Dulock, CSB celebrated 50 years of priestly ministry surrounded by those he has served over the years. The celebrations began with Mass held at St. Anne’s Church in Houston, Texas. Father Kevin Storey, CSB, superior general of the Congregation, presided and was joined by Basilians from the Houston area. Family and friends from all over the United States traveled to be a part of the celebrations. The Mass was followed by a reception held in the Parish Hall.

Father Dulock grew up in a Catholic family as one of six children of Victor August Dulock and Libbie Agnes Zalman. He entered the Basilian novitiate in 1959 and professed his first vows 60 years ago on August 15, 1959. On December 20, 1969, he was ordained to the priesthood in St. Anne’s Church by Bishop John Morkovsky. As a Basilian Father, he has studied in Canada, France, Switzerland, and the United States and has earned four degrees. His priestly ministry has been varied, having taught in universities and high schools and served as a pastor for 27 years in the Archdiocese of Galveston-Houston. Currently he serves as the director of St. Joseph Mission Center, where he raises money for the Basilian missions in Mexico and Colombia.

He also took the opportunity to thank God for his many blessings. “I thank God for my family, my vocation as a priest, the Basilian Fathers and the many friends and associates he has blessed me with along the way, especially the many friends in the three parishes I have had the privilege of pastoring in the Archdiocese of Galveston-Houston (St. Anne’s, Sacred Heart of Jesus in Manvel, Texas and Most Holy Trinity in Angleton, Texas) and the ones I help at the most, St. Laurence and St. Thomas Aquinas in Sugar Land, Texas and Holy Family Missouri City.”