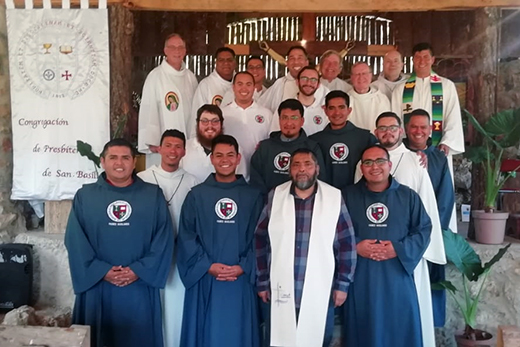 In preparation for the Novice Gathering, the novices learned English and Spanish in order to be able to converse with one another. The preparation bore fruit as the novices overcame cultural and language barriers to come together in prayer, recreation, and discussions.

The week provided plenty of opportunities to sit with one another and talk about their experiences as novices. Members of each novitiate presented to the group about their daily routine, spiritual activities, and prayer life. It was clear that while each house may place emphasis on different facets of novitiate life, there were not major differences among the novitiates despite the geographical distance.

One noted difference among members of the different novitiates was the clothing worn during liturgies. The novices from Mexico wear grey habits emblazoned with the Basilian crest, novices in Colombia wear long white albs, and the novices from the United States don’t have special vestments unless they’re serving.

The Gathering included a trip to Oaxaca, Mexico to view the pyramids and ancient city of Monte Albán, where the novices came together and danced to “Laudato Si”, St. Francis’s hymn for the beauty of Sister Earth.

The group was joined by members of the General Council, Father Kevin Storey, CSB and Father John Huber, CSB for the Feast of the Presentation celebrations. Father Storey celebrated Mass and blessed each of the three groups of novices as they brought up the gifts.

The Basilian Fathers present remarked how this gathering reminded them of their own formation years. “The Basilian novices’ gathering was fruitful, spiritual, and joyful. To witness novices from three different countries communicate with one another in a true spirit of brotherhood despite language barriers was inspirational. When some of the novices expressed, during an evaluation of the retreat, that a spiritual bond of Basilian fraternity was created, I pointed out that the fraternity already existed, and was able to come to the surface with a face-to-face gathering of these fine men in formation. It reminded some of us of our days on Strawberry Island when the associates gathered for a week every summer,” said Father John Huber, CSB.