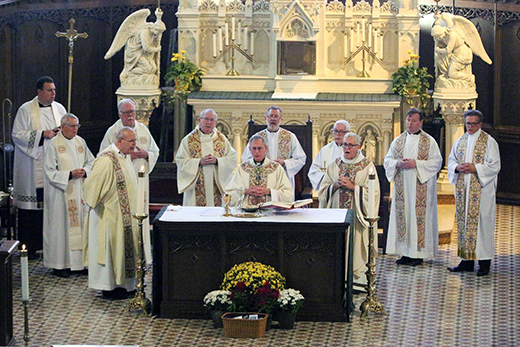 On September 8, God called the parishioners of Assumption Church in Windsor, Ontario back home as Mass was celebrated for the first time in the historic church in almost five years. The Mass was presided by Bishop Ronald Fabbro, CSB and concelebrated by Fathers Maurice Restivo, CSB, parish pastor; Steven Huber, CSB; Mark Gazin, CSB; Kevin Mannara, CSB; Paul McGill, CSB; Don McLeod, CSB; Leo Walsh, CSB; and John Wheeler, CSB. The Mass was followed by a picnic on the grounds.

Father Restivo described the feeling of being back in his Parish’s home as, “surreal, I couldn’t believe it was really happening.” The reopening was a result of tireless fundraising, dedication, and prayer.

The church closed suddenly in November 2014 due to safety concerns about its condition. The building was shuttered and Sunday Mass was relocated to nearby Holy Name of Mary Church.

Renovations required to reopen the church were estimated to cost $20 million and many feared that the church may never reopen. Attendance dropped and parishioners’ hope of returning to their church continued to fade with each failed fundraising attempt.

“Assumption Church is not just about a building, but the presence of Catholicism in Windsor and Southwestern Ontario,” said Father Restivo, who came to the parish in May 2015, shortly after the closure. “The building had more significance then I first realized–it’s an original icon and a real sign of the presence of the Church in the region. It’s the oldest church in the area and it’s located right next to the bridge to the United States, so it’s the last thing you see when leaving Canada. It has a special place in the heart of all Windsorites,” he said.

The parish was founded in 1767 as a unique Huron and French-Canadian community and has been the cornerstone of Christianity in all southwestern Ontario. The church was built in 1845 and is the oldest parish in Canada, west of Montreal. In 1870, Basilians were invited to take charge of the parish and have continued to serve in the community at Assumption Parish and Assumption College.

Father Kevin Mannara served at Assumption from 2015-2017 as a Basilian scholastic. He was tasked with helping unite the four parishes that had merged to form Assumption Parish. “To return to Assumption Church while still divided would not be the foundation for a lasting church community,” he said.

This foundation for a united Assumption Parish was created by organizing social events to facilitate parishioners getting to know one another, renovating Holy Name of Mary Church to give it a fresh look, and praying for the reopening of Assumption Church.

In October 2017, Assumption Parish joined together to celebrate its 250th anniversary with Mass and a sold-out gala luncheon. An announcement by Bishop Fabbro gave even more cause to celebrate–Paul Mullins, a local lawyer, was launching an independent study. This study symbolized a move forward and renewed interest and hope in the restoration of Assumption Church.

Thanks to a contribution of $1 million from the Diocese of London and a community fundraising campaign, renovations began in June 2019 with the installation of a new copper roof. On August 15, the Feast of the Assumption, Bishop Fabbro’s announcement that phase 1 of the renovations was complete and Assumption Church would reopen in September was met with applause.

Since its reopening in September, the parish continues to grow and Father Restivo enjoys seeing new faces in the pews. “Seeing our numbers increase each week reaffirms that the decision to return to Assumption Church,” said Father Restivo.

There is still a long way to go. Phase one of the restoration is nearly complete, but $2.25 million is still needed for phase II, which is scheduled for spring.