Basilians Celebrate Installation of Dr. Sylvester as President of USMC 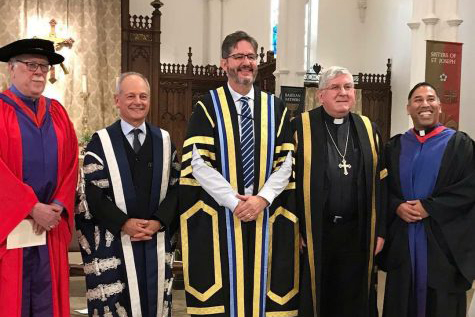 The Basilian Fathers celebrated the installation of Dr. David Sylvester as the 8th President and Vice-Chancellor of the University of St. Michael’s College (USMC) at St. Basil’s Collegiate Church on October 4, 2018. In attendance were the USMC Collegium, Basilian Fathers, colleagues, family, and friends. His Eminence Cardinal Thomas Collins the Archbishop of Toronto and Chancellor of University of St. Michaels’ College administered the declaration of office and officially installed Dr. Sylvester to his new role.

Dr. David Sylvester was appointed by Father George Smith, CSB as the President and Vice-Chancellor of St. Michael’s on July 1, 2018 upon the recommendation of the Collegium. Dr. Sylvester is one of Canada’s most experienced leaders in Catholic higher education. He had served as the Principal of King’s University College at Western University since 2009 and before that as the founding President of Corpus Christi College and as the Principal of St. Mark’s College at the University of British Columbia for 10 years. Throughout his career Dr. Sylvester has embodied the principles, mission, and traditions of the Basilian Fathers in Catholic education, a practice he will carry on in his new role at the University of St. Michael’s College.

Read an edited transcript of his speech here