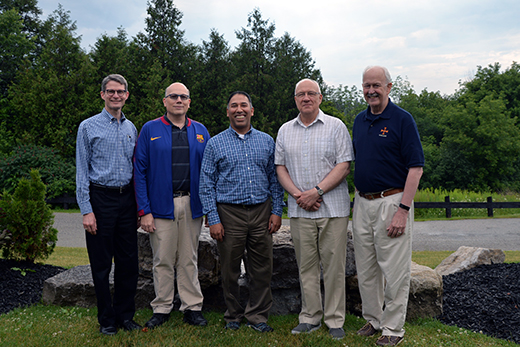 “I am looking forward to continuing the rich legacy of teaching goodness, discipline and knowledge to the next generation of parishioners and students. Basilian priests always made the Gospel accessible for me as a student and we have to imagine how to best preach Jesus today,” said Storey.

Storey has ministered at St. Thomas High School in Houston, Texas since 2004, first as a math teacher and then in 2012 he was appointed as the School’s President. He has also served on the General Council as Second Councillor since 2010.

Born in Madras (now Chennai), India, Storey came to know the Basilians as a high school student at Michael Power High School in Toronto, Ontario. He was ordained to the priesthood on June 27, 1992 in St. Basil’s Church in Toronto. He holds a Master of Divinity from the University of St. Michael’s College; a Master in Pastoral Counselling from Assumption University; and a Master of Education, Administrative Leadership from the University of St. Thomas.

Founded in France in 1822, The Congregation of St. Basil, also known as the Basilian Fathers, is a vibrant community of priests, students for the priesthood, and lay associates who profess simple vows. Basilians serve God through their apostolic work in education and evangelization throughout France, Canada, United States, Mexico, and Colombia.