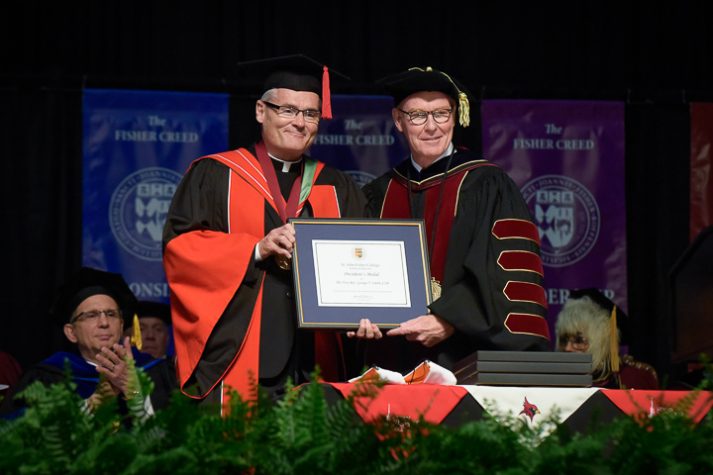 Congratulations to Father George Smith, CSB, who was awarded St. John Fisher College President’s Medal. The award was presented by the College’s president, Dr. Gerard J. Rooney, at the 64th Commencement held on Saturday, May 12 in Rochester, New York.

The award recognizes his leadership of the Congregation of St. Basil as the Superior General for the past eight years. The College was founded by the Basilians in 1948; and throughout its 70 year history, the Basilians have continued to have a strong presence on campus. Most recently, this relationship has been fostered through many happy occasions including the opening of the new Hermance Family Chapel of St. Basil the Great, which was celebrated in September 2017. The Chapel fulfills the founding Basilian Fathers’ vision for a freestanding chapel in the heart of St. John Fisher College campus. And following his ordination to the priesthood in August 2017, Father Kevin Mannara, CSB was assigned to lead campus ministry at St. John Fisher College.