The Vocation of Educators Celebrated at St. John Fisher College 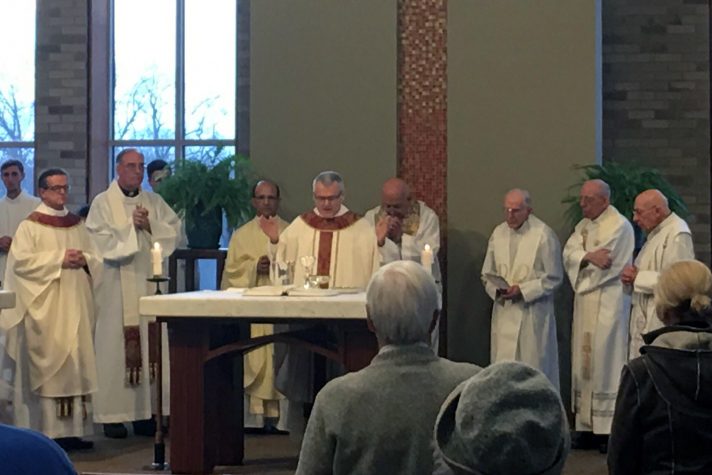 St. John Fisher College celebrated the vocation of educators on the Feast of St. John Bosco on January 31. Father George Smith, CSB, Superior General of the Congregation, presided and preached at a Mass held in the Hermance Family Chapel of St. Basil the Great at St. John Fisher College in Rochester, New York. St. John Bosco is one of the Basilians’ patron saints and was chosen for his dedication to educating disadvantaged youth.

The Mass and reception that followed were co-sponsored by the Office of Campus Ministry and the Ralph C. Wilson School of Education. In attendance were several St. John Fisher students, professors, administrators, including the school’s dean, as well as representatives from local Catholic high schools. The Mass was concelebrated by Father Kevin Mannara, CSB, Director of Campus Ministry, and the Basilian Fathers who minister in Rochester, as well as Father Bill Graf, chair of Religious studies.

In his homily, Father Smith stated, “there must be in a prospective Basilian, at least in my mind, an innate desire to educate, that is to enable, to facilitate men and women becoming the men and women God calls them to be, to lead them (that is the meaning of the word), to lead them to the fullest experience of their humanity. That can happen in a thousand different ways in and out of the classroom, but educators cannot help themselves, they feel driven to enable others to experience the fullness of life.” He concluded by saying, “At its best, education is an experience of communion. And it is therefore profoundly connected with the Eucharist that we celebrate this afternoon. To see the connections between education and Eucharist is to see how and why education is a vocation, and to see how and why Jesus is truly the Master teacher. It is he who calls us into communion that is education in its most life-giving forms.”

The Mass was followed by a reception hosted by Dr. Gerard J. Rooney, president of St. John Fisher College, and his wife Susan at their home in honour of the Basilian Fathers.