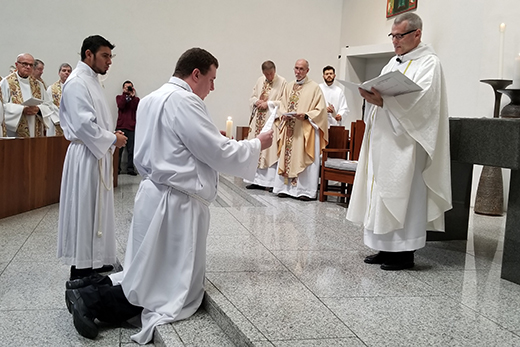 The Basilian community rejoices as one of its men in formation commits himself perpetually to the Congregation. On Saturday, January 20, Steven Huber, CSB professed his final vows of poverty, chastity, and obedience in the Chapel of St. Basil at the University of St. Thomas in Houston, Texas.

“Regardless of where I end up ministering, my life as a Basilian gives me a unique opportunity to share the love of God with all the people that I meet. This has been the most rewarding aspect of my time with the Basilians thus far, and I pray that it will continue to be rewarding well into the future,” he said.

Steven prepared for the liturgy by studying the Rite of Profession and reflecting on the words and meanings of the Rite. This allowed him to choose scripture readings and music for the Mass. Father George Smith, CSB, superior general of the Congregation, gave the homily and received the final vows.

In preparation of this important step into religious life, Steven went on a silent retreat prior to Christmas to reflect on the meaning of each of the three vows of poverty, chastity and obedience and how he can better live these vows each day.

His formation was guided by his novice master, Father Vince Dulock, CSB and his assistant novice master, Father Bob Duggan, CSB. As well as, the priests who currently live in the Keon House Scholasticate: Fathers David Bittner, CSB, Ron Schwenzer, CSB, and Richard Wahl, CSB. The guidance and examples they set taught him much about what it means to be a Basilian Father and has helped him feel more comfortable as he prepares to live in that role himself.

As well, there were many informal influences in his formation through the Houston area Basilians, especially among the older generation. Steven cherishes the time he spends among the residents of Dillon House, the Basilian retirement community in Houston, where he has witnessed examples of holiness among the Congregation’s senior members.

In attendance for the Mass of Final Profession were Steven’s family including his parents, Lawrence and Lynn, and brother, Greg; the Basilian Fathers who minister in Houston along with the Basilian Lay Associates of the Houston area; members of the St. Mary’s Seminary community; and the University of St. Thomas faculty, staff, and student body, including Dr. Richard Ludwick, the president of the university.

Steven will continue his theological studies at St. Mary’s Seminary in Houston and will be ordained to the diaconate on Saturday, May 12, 2018 at the Co-Cathedral of the Sacred Heart in Houston, Texas.