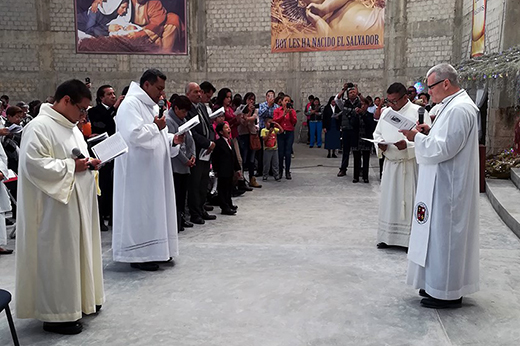 The Basilian community was blessed to conclude 2017 by rejoicing as two of their confrères perpetually committed themselves to the Congregation of St. Basil. On Saturday, December 30, Alejandro Estrada Pérez, CSB and José Alberto Juárez Sandoval, CSB professed their final vows in the Church of San Lorenzo in Tehuacán, México. Father René J. Espejel, CSB, superior in México, presided over the celebrations and Father Paul Walsh, CSB, director of scholastics, gave the homily. Father George Smith, CSB, superior general of the Congregation, received the vows of poverty, chastity, and obedience. This important step into religious life represents three essential elements: consecration, communion, and mission.

In professing their final vows, Alejandro and José Alberto have consecrated, or entrusted, themselves to God through living out their lives in accordance with the Basilian Way of Life.

Through communion, they will live their lives in fellowship with their local communities, professed members of the Congregation of St. Basil, and the communities of the parishes, campus ministries, schools, and colleges where they will serve.

In preparation for priestly ministry they are in their final semester of theology studies. This education will provide the scholastics with the foundation to accompany those they will serve in their relationships with God. They are also involved in catechesis at the nearby Rectory of San Juan Bautista, where they assist by giving catechesis and training other catechists. José Alberto works principally with adults and Alejandro works with young children ages six through twelve. They also help the priest at liturgy and at times have led communion services and preached. Each year during Holy Week they serve as missionaries to rural parishes so the people can experience and live the liturgies of Holy Week. Through this mission work they gain training working in a variety of parishes and come to understand the diverse needs of each parish.

This was the first profession of final vows held in México in 16 years and over 500 people gathered for the occasion, filling the Church of San Lorenzo. Among those in attendance were the entire Basilian community in México, including priests, scholastics, novices, and associates; and many men and women religious, especially the Missionary Catechists of the Sacred Hearts of Mary and Jesus (also known as the Violetas) and the Missionaries of the Sacred Heart of Jesus of Xalapa (or abbreviated to MSCJX in Spanish). The Basilian Fathers have worked with the Violetas since the 1940s, beginning in Texas and then in México. Basilians currently work with the MSCJX in San Lorenzo. The Mass was followed by a reception, attended by over 300 people.